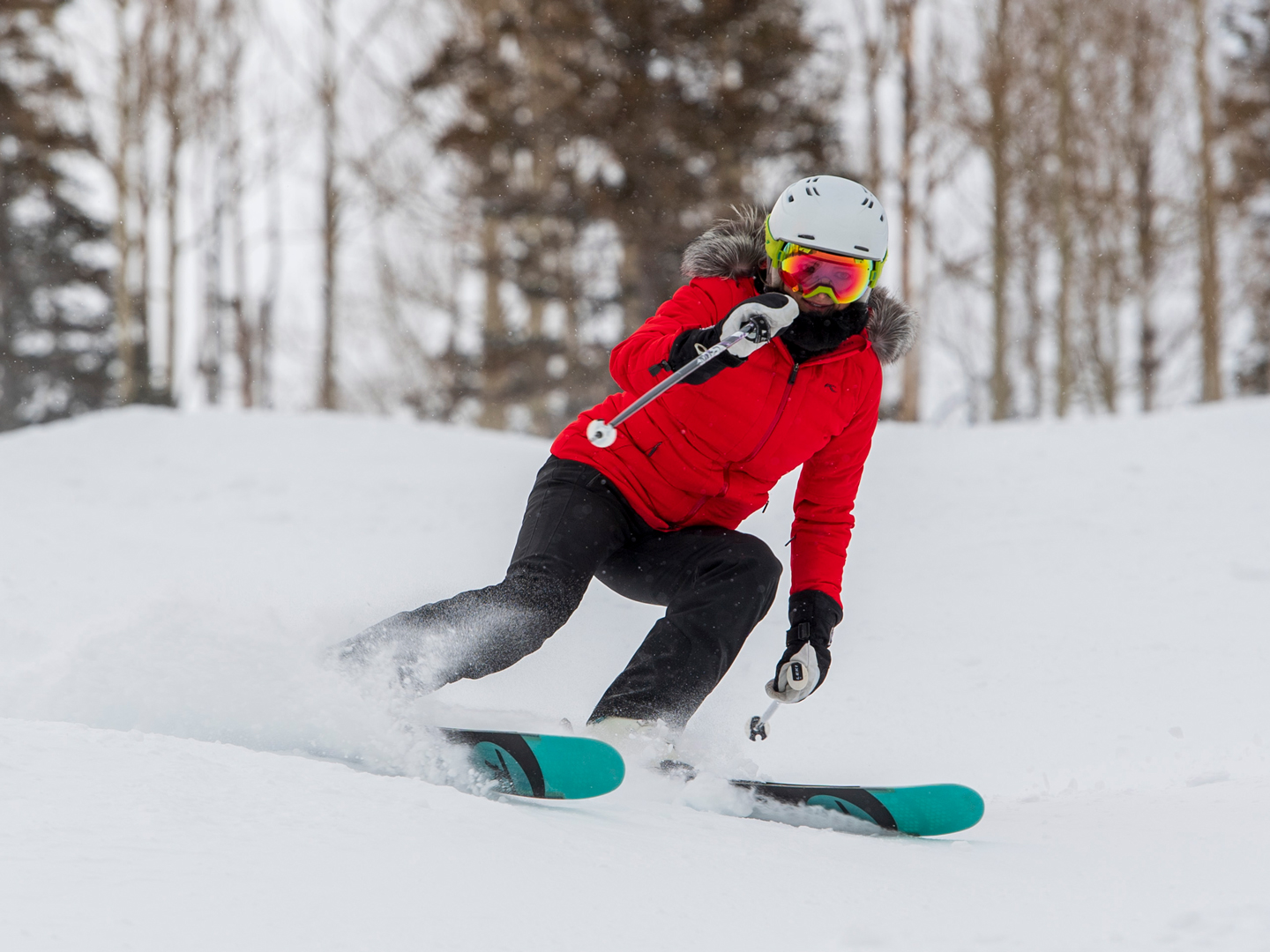 Sometimes it’s time to trade your formal suit for a ski suit so you can play in snow.

It’s the day after Christmas and now’s the perfect time to ski (provided you can stand the lines – one of the benefits of skiing solo!).  If you had asked me 10 years ago at the end of 2009 if I’d love skiing and have relocated my whole life in order to make it a priority I would have about died laughing. At the time I hated skiing (I’d been once as a kid and it was a total disaster). Fortunately, a year later while living in Madison, WI I was dating someone who was an expert and their attitude was – if you’re dating me, you’re going to ski. So, I learned; first in Madison at Cascade Mountain (not really a mountain), and then at The Canyons – which is where I still love to ski. And very quickly realized that I absolutely loved it – it fueled a whole lifestyle I didn’t even know I needed.

Growing up south of Houston where it’s hot and flat I was never enamored with the idea of mountains – I thought they were foreboding, and snow unnecessarily messy and freezing. The idea of strapping boards to my feet so that I could float across snow was not appealing – though the idea of après skiing did seem glamorous.

But once I learned, my whole perspective changed. The mountains became glorious playgrounds filled with powerful, positive, grounding energy that was contagious. Every time I’d come to visit Park City* I’d wonder how I could build a life where I didn’t have to fly home and leave.

*I love skiing many places, but Park City always felt like a livable location  – and it is. 30 minutes door to door to the airport, 7 minutes from my garage to the base of Canyons parking lot, new Whole Foods, world class restaurants, spas, and a full community that lives here year around – not just seasonally.

I think I love skiing so much because it combines so many things I enjoy:

As a result, it’s my perfect work/life balance activity. Few other activities allow me to completely disconnect and recharge the way skiing does.

That said, I’ve also taken my fair share of conference calls from the slopes – those calls where you don’t need to talk just listen, or where the person you’re meeting with doesn’t care about what you’re doing. Headphones in, and I can easily ski and talk.

Fall of 2014 I was traveling a ton – 2-4 cities a week, and I was living in Houston. I knew there was no way I’d get to ski at all that upcoming season if I wasn’t based somewhere where I could ski (no chance I’d get home on a Thursday night and then fly out Friday for a day of skiing before needing to go somewhere else). So, I found a short-term rental for ski season (Jan-Mar) and temporarily relocated to Park City. Thankfully a colleague of mine who was on project in Houston was wanting to get out of staying in a hotel, so she sublet my apartment and was able to save her client money too.

That ski season I skied every day I was in town – I wasn’t home much as I was working a lot, but I had the best time. I returned to Houston at the end of the season, but that experience had solidified for me that I needed a ski house, and a future in the mountains.

The following season I convinced my new bf who was in the process of evaluating where to live after leaving Manhattan that he should consider a stint in the mountains as well. He ended up loving Park City so much after just a few months he bought a condo. I’ll never forget the drive to Park City from the east and him doubting that there were going to be any mountains at all (he’d never been to PC). I spent the next year splitting my time between Houston and Park City – where I finally got to experience my first summer (hint: summer in PC is even better than winter!), until he proposed, and I relocated to PC full time for a few months before landing a client in Cincinnati, OH (where he was from) which required we move.

A year, a wedding and a scandal later, and I was faced with deciding where I wanted to rebuild my life. I knew if I returned to Houston or any major city the environment would be too social and too focused on materialism and unhealthy activities, and that I really needed time to heal and reset. The last thing I wanted was to be hit on or to have friends trying to set me up on dates. I didn’t have the energy to be around people, so I selected a location that I knew was recharging – that has always put things in perspective for me, where I could rest, be left alone, and ski (and hike, bike, etc.). I still traveled regularly which offered a great balance – Chicago every other week provided culture, and big city energy and Park City provided peace and calm.

I’ve now been residing full time in Park City for a year and a half and am so grateful for the opportunity to live here.  I never knew I’d be so well suited for snow!

As for this ski suit – it was a Christmas gift last year from my parents. Up until this past year I’d still been skiing in the original outerwear I got when I first learned how to ski. To say technology had advanced since then is a bit understatement – I always looked like an absolute marshmallow having to wear so many layers to try to keep warm yet still freezing and being unable to move very well. I wanted functional ski clothing that looked great but was incredibly warm. So much of the ski wear that looks good isn’t for people who actually ski (yes, I’m referring to all the ‘influencers’ who tuck their pants into their ski boots and don’t wear helmets in their photos. If you actually ski, you know that you want your pants out of your boots so they don’t bruise your shins, and that you absolutely should wear a helmet – plus it’s way warmer).

My mom went shopping with me last November and I tried on everything – finally deciding upon a down Kjus jacket with coordinating pants from Gorsuch (my favorite mountain luxury story in PC). I adore this jacket – I no longer need to wear anything other than one base layer. It’s so warm. The hood actually fits over my helmet and stays up while skiing if it’s really snowy or cold, the coat is well tailored to provide some shape, and it offers 4 way stretch so movement is never restricted. Also, the color is the perfect shade of orangy red. It’s brighter than ski patrol, but as I joked with my mom – now when I’m in the trees you’ll be able to see me!

I picked up the fur gator when I got my new coat and pants and couldn’t be happier – the fur dries almost instantly so it’s never cold and wet on your face, and because it’s stretchy it allows some air to come through so that you don’t fog your goggles when you wear it up high on snowy days. It is significantly warmer than my previous gators.

My mittens are Hestra and are the warmest I’ve found – my extremities are always cold, but these do a good job.

My helmet was an upgrade a few seasons ago, and with the warmer ear pads and lining is wonderful. And my goggles were a necessity many years ago upon arriving at Deer Valley and realizing I couldn’t find my goggles – I tried unsuccessfully to ski in sunglasses and ended up at the Montage needing to buy new goggles so I could enjoy the day. While they were a fortune – they’ve made every day I ski so much better.

You likely know by now I adore shoes – well, my ski boots are the most expensive footwear I own. Custom fit from the best boot fitter arguably in the world – bootworks at the base of Park City Mountain. Once I switched to custom fit boots – my skiing drastically improved. No more calling a day short because your feet hurt or complaining every run at the bruising. I finally had control over my skis. And, as this is a cool story – one day someone was messaging me on Insta, we start chatting about PC and come to find out her dad is the owner. She’s currently living in Singapore consulting for Accenture – Such a small world!

My skis are a Rossignol Savory 7 – I upgraded to a fatter and longer ski in 2016 and it was the best decision – finally a strong enough skier to handle the added width I adore how these let me tackle any terrain. With these I feel just as comfortable on groomers as I do on crud and fresh deep powder.

If you love to ski, make investments in your gear, as it will make a significant difference in your skiing. And sometimes, there’s opportunities to ski with clients and co-workers, so you want your selections to be suitable for those situations too. 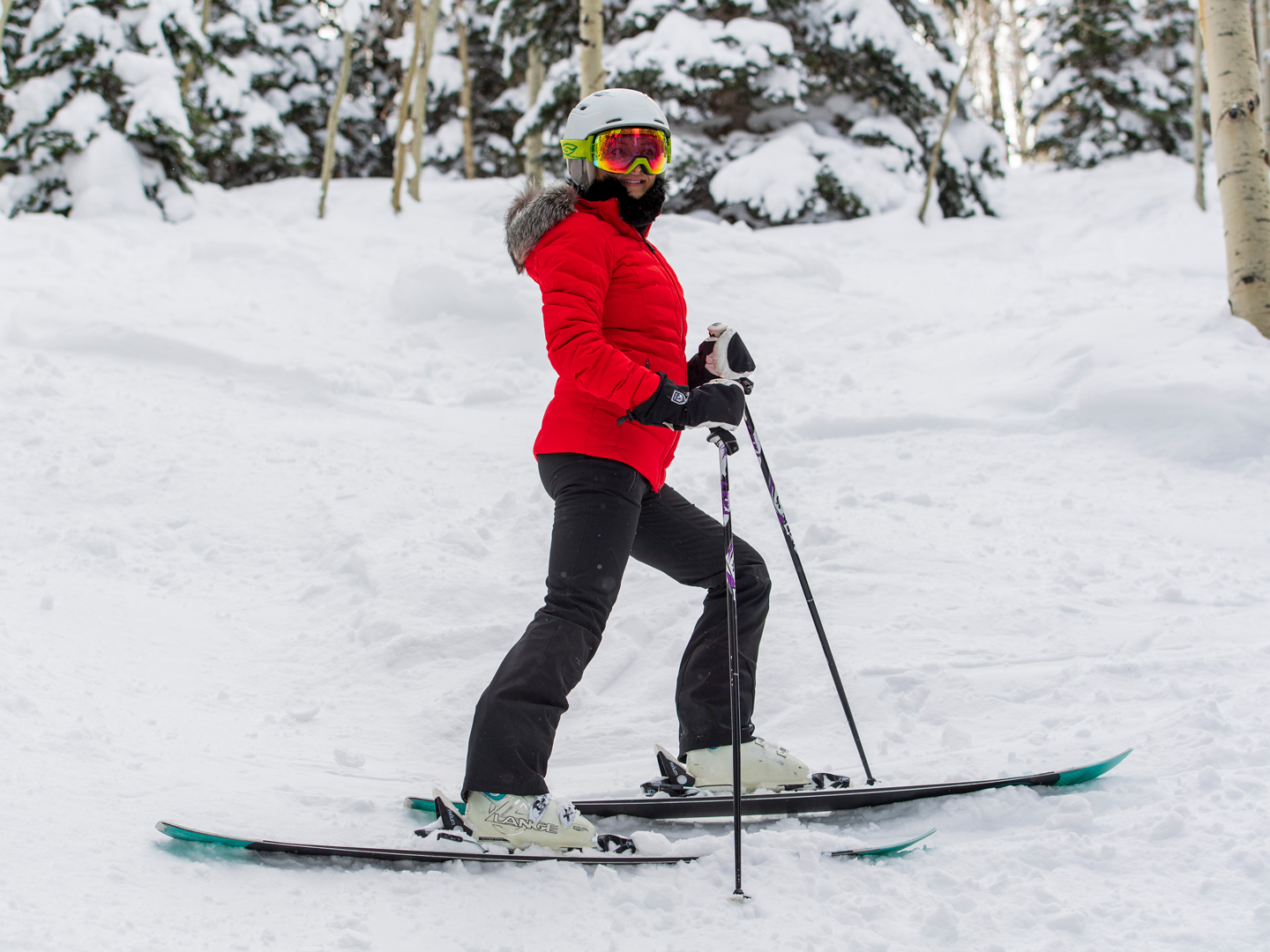 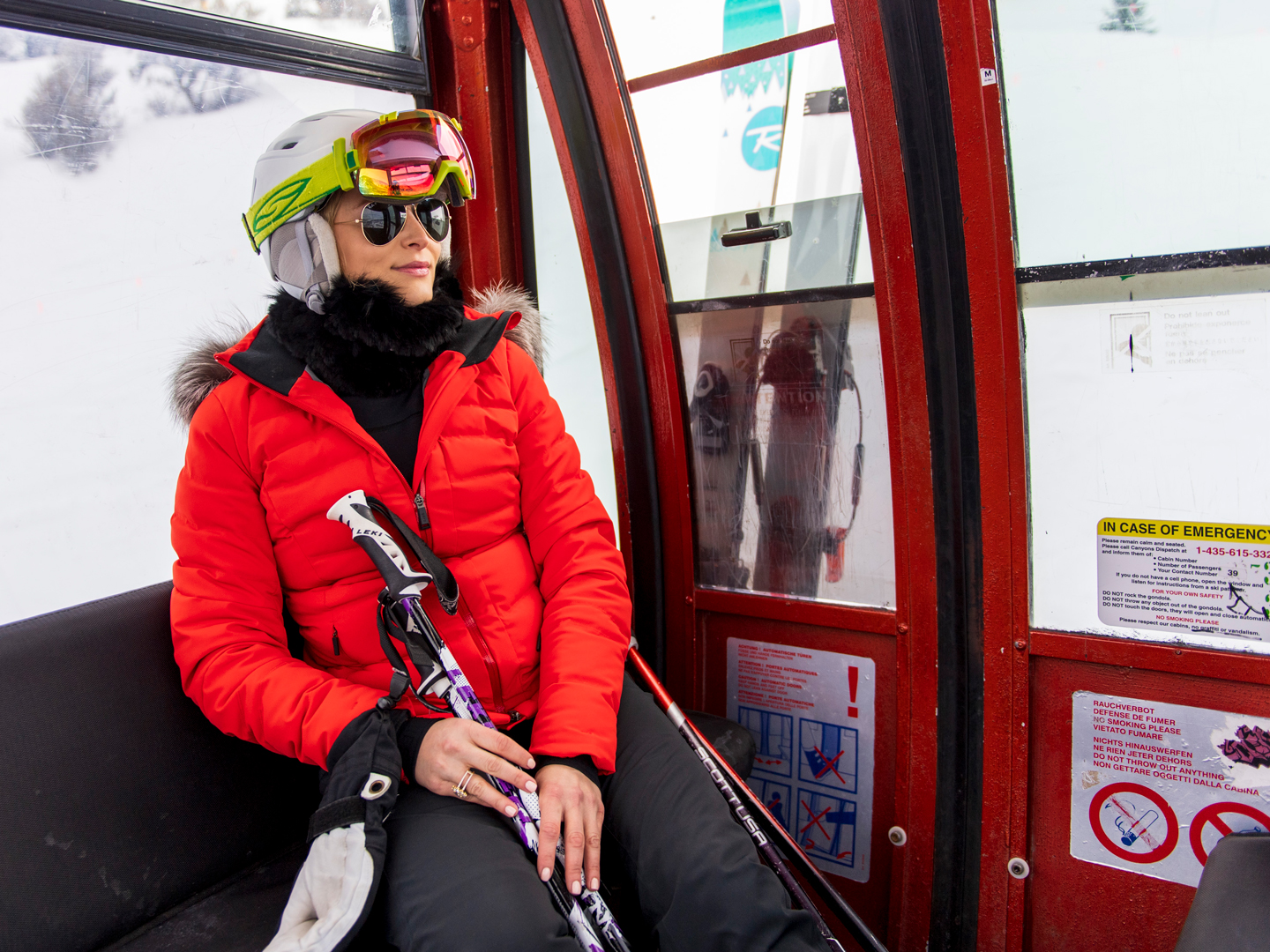 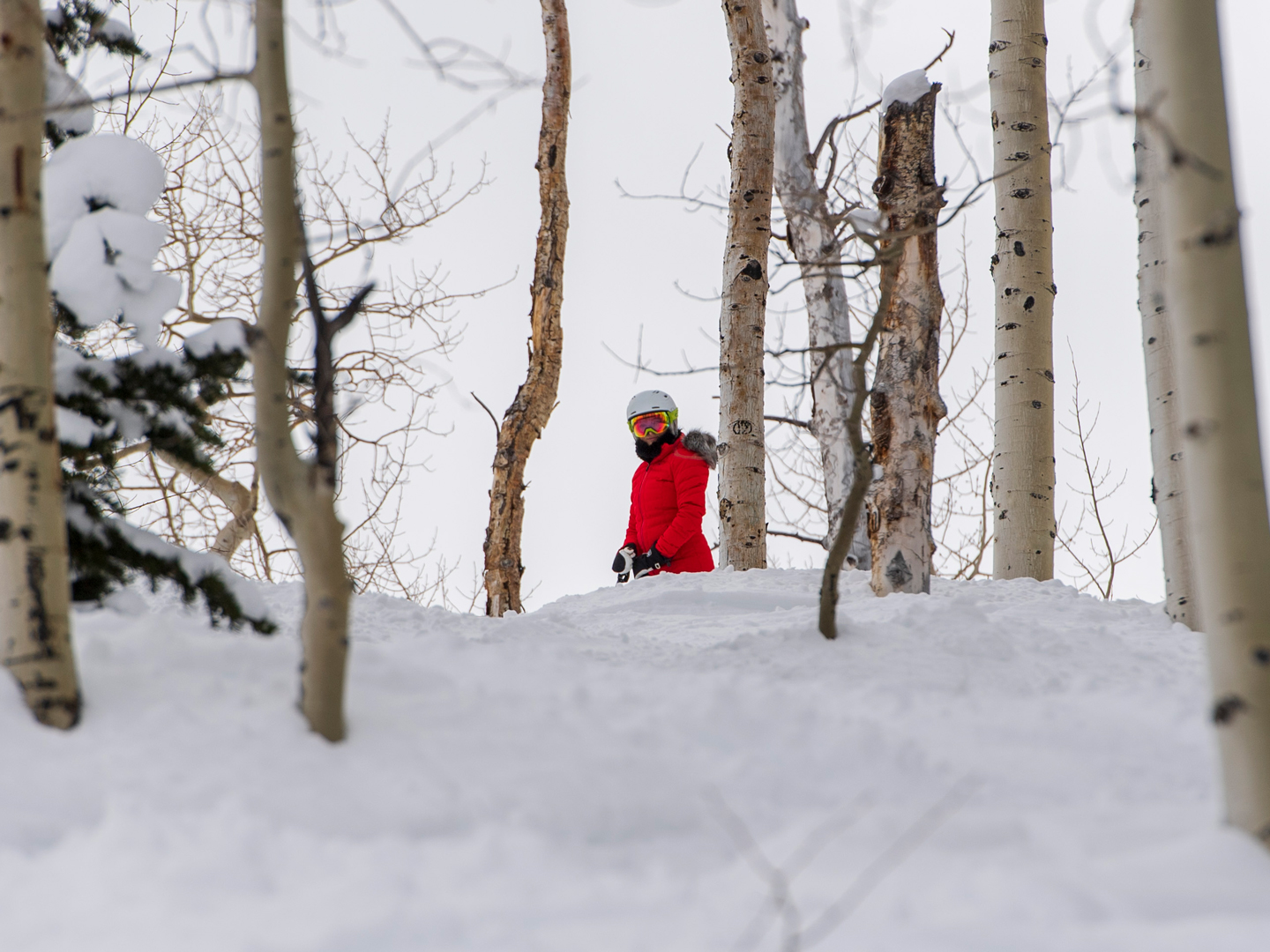 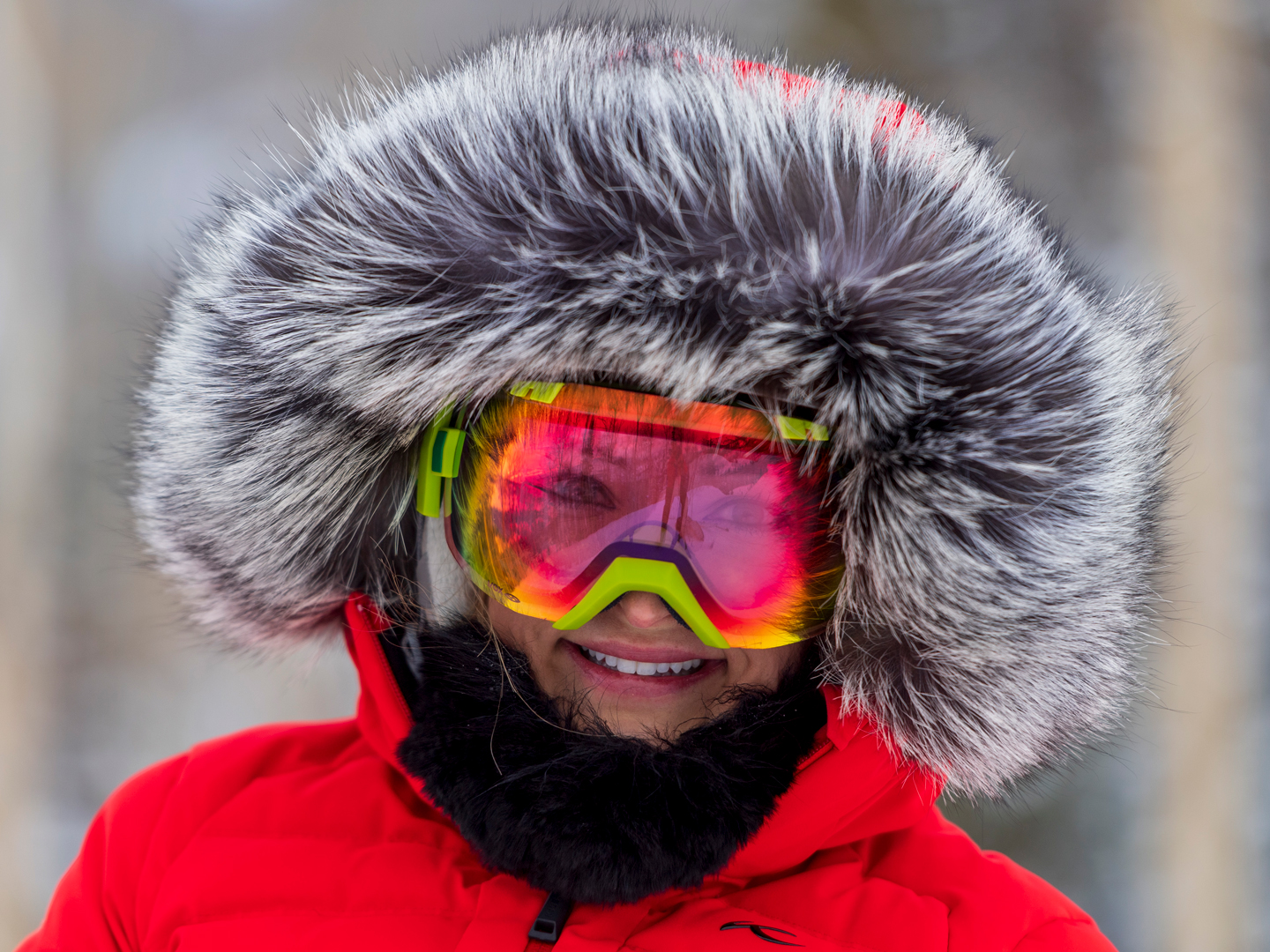 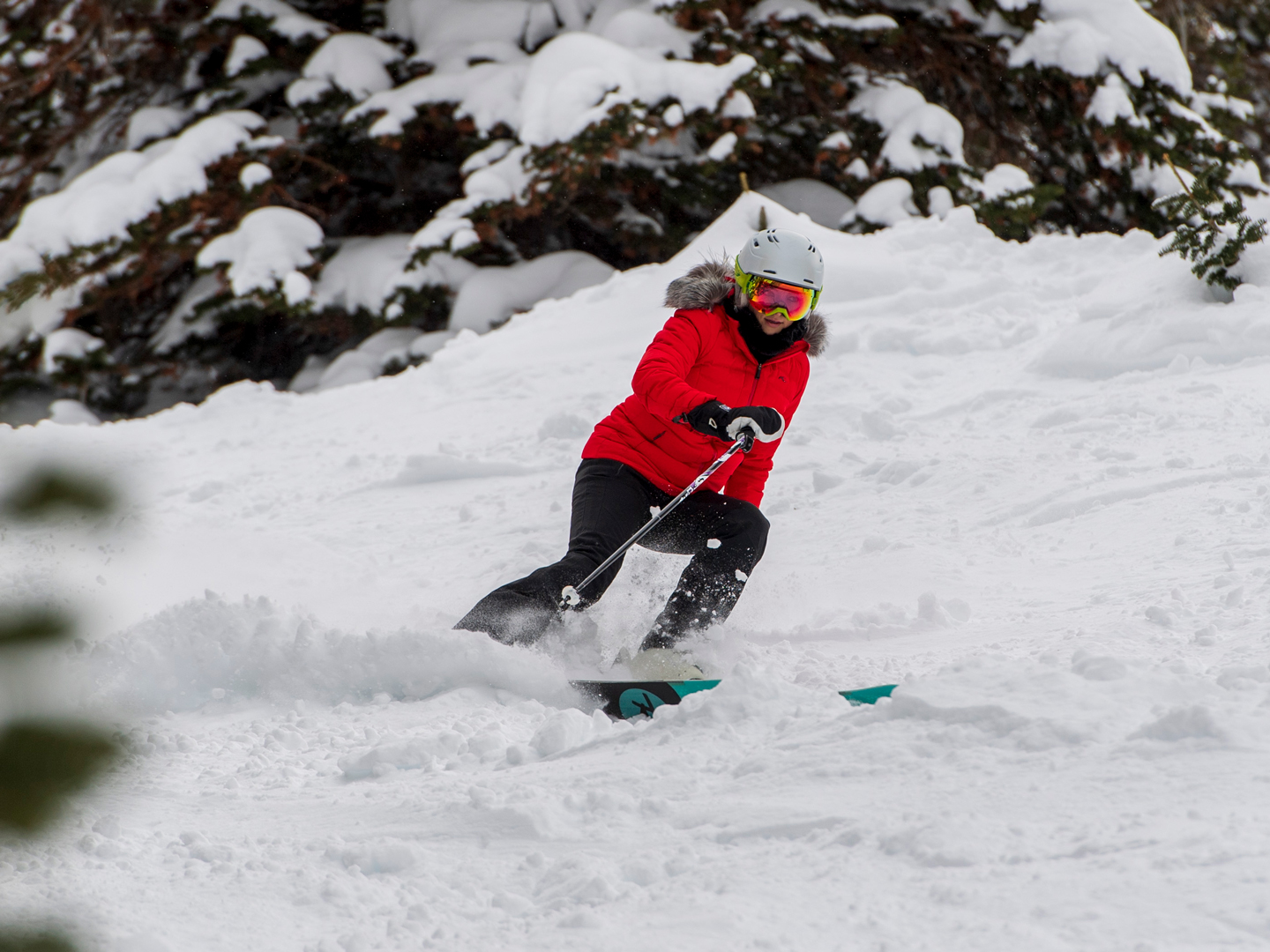 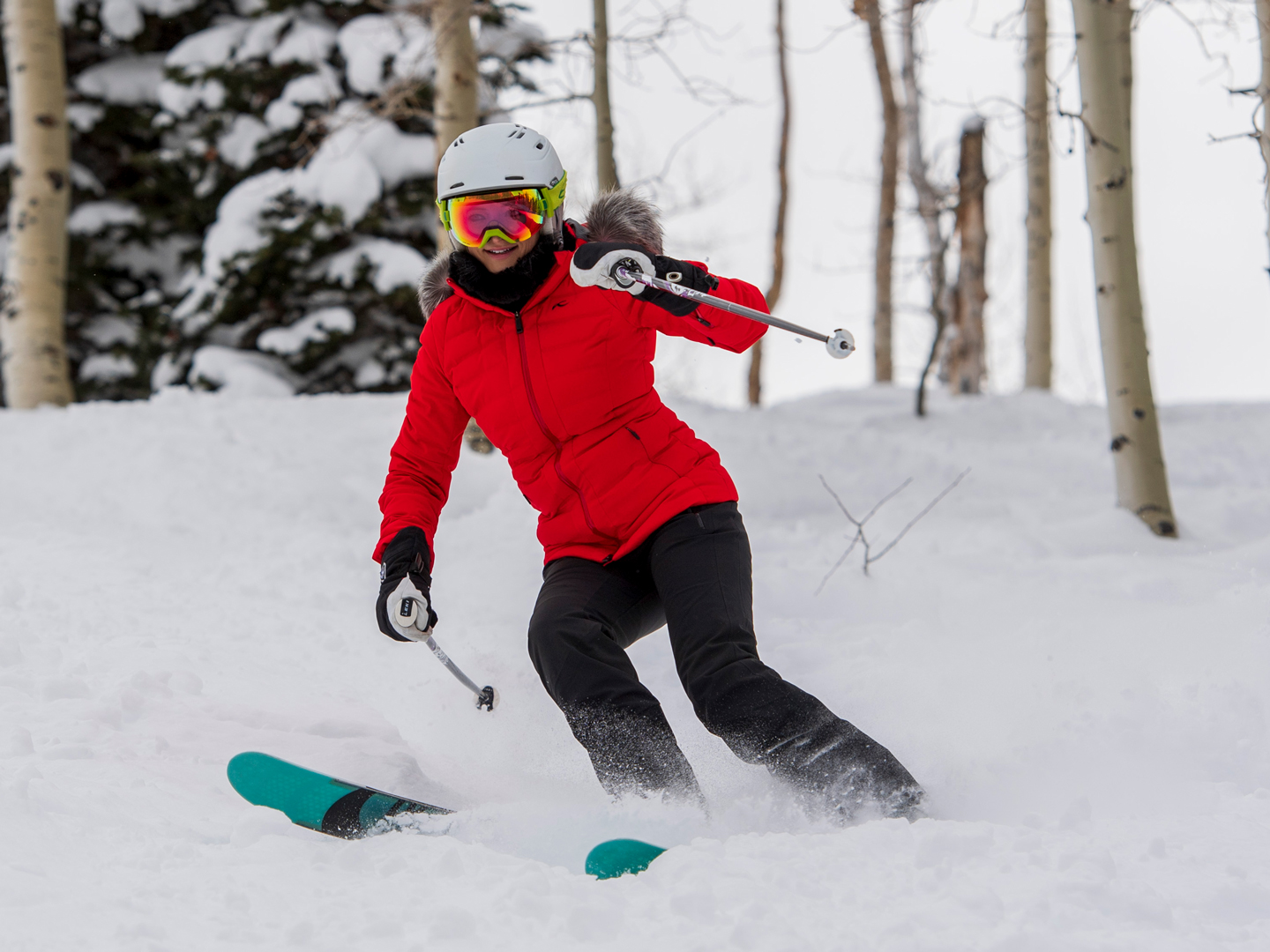 A Guide to Curating Your Professional Wardrobe.
Buy Now